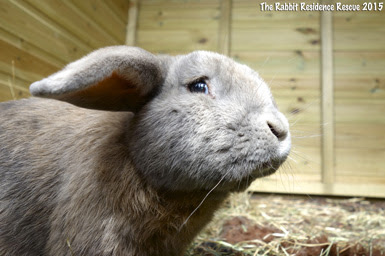 It is with a very heavy heart that I have to report that yesterday we said goodbye to our dear old Houdini, long time resident and the bunny whose tail currently decorates the heading of this blog.

Back when I started volunteering at the Rescue in 2008, Houdini and his then partner Tequila were young and lively bunnies. One of my earliest memories of him was, in keeping with his name, being the first (but not the last) to outsmart my friend Helen, escaping from their enclosure for a jaunt around the Rescue. Herding such a mischievous and energetic little scamp back to his own house was quite a challenge, but it certainly taught us a lot about his personality very quickly!

Houdini was perfectly healthy and desperate for his own family but because of Tequila's eye problems it looked like they would be permanent residents. In a similar situation were another resident pair, Panda (healthy) and her husbun Heathcliff (not so healthy). Not wanting two healthy bunnies to miss out on finding their own family, Caroline took the unusual decision to do a wife swap, Panda moving in with Houdini, Tequila joining Heathcliff. It seemed slightly cruel to take them from their original partners, but as well as giving Panda and Houdini a real chance of finding a home it also turned out that the new pairings were far better matches. Their personalities just seemed to fit together better and both of the new pairings saw increased levels of snuggling and mutual grooming!

Houdini and Panda did then find their own home where they lived happily for several years, but following some health issues and vet trips they broke up and Panda decided she had had enough of him. So sadly in the summer of 2013 he came back to the Rescue, where after some months of bachelordom he finally decided to make a go of it with recently widowed resident Mars. 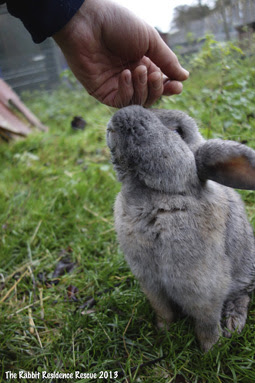 I guess there's not much to tell after then. He lived his remaining time pottering about amusing himself, loving his food and nose rubs until finally age started to take its toll on him. He developed spondylosis and over the recent months his mobility gradually declined while the pain increased. Around two weeks ago, Caroline let the volunteers know that we were reaching a point where we would have to let him go, giving us all a chance to spend one last time with our sweet old boy. By yesterday, with his happy moments starting to be properly eclipsed by periods of real pain and distress, Caroline took him for his final trip to the vets, where he was helped on his way to the bridge.

Goodbye Houdini. You were a very special boy, one of the first I met willing and eager to teach me what rabbits were all about. You will always have special place our hearts. Binky free, sweet Houdini. 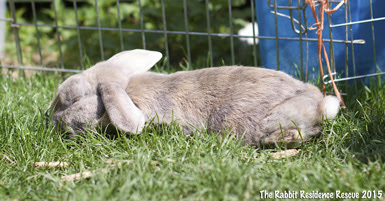