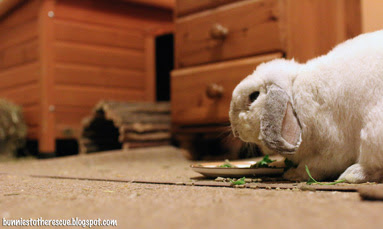 It was a dark and cloudy day today so we didn't get any good photos of Whisky - I'm afraid the best I could do was this shot of his shaved ear while he was nomming his post-dinner parsley treat.

Whisky had his CT scan on Monday. I wasn't expecting much, ready to accept it was probably an aggressive attack of his recurring infections, but they found several items of concern. The most significant was a mass in his nose and a massively swollen adrenal gland. Either or both could be tumours, the thing in his nose could be an abscess so we are now waiting for more tests to see if anything can be done for him. We should know more in the next week or so, in the meantime he is back on his favourite tasting medicine, Metacam (pain relief and anti-inflammatory), alongside the usual twice daily nebulising.

Considering all the extra vet trips, he does seem in fairly good spirits and though his weight dropped again his appetite has improved a little. For now we are just trying to stay positive and enjoy our days, something Whisky is happy to do so long as the extra parsley and carrot portions keep coming!

Posted by Bunny-Hugging Volunteer at 19:53