During the week Whisky's weight continued to drop and we had some frightfully messy days, but by the end of it we had mostly reached another stable routine with few surprises. He has a mostly bald bottom now, but without the fur it is both less prone to trapping anything that oozes out of that end and easier to keep clean when it does.

I have avoided trimming Whisky's foot fur because I don't want him to get sore feet, but thankfully the fur there is shorter and easier to clean. However, he has managed to create a sore spot on one of his back feet where he has worn a bit of fur away. The position of the sore means he can race about without issue, but when he stops he can't put his weight back on it comfortably.

Friday I finished work early and found Whisky was in an unusually happy and lively mode, even racing downstairs to demand some time outside. It was great to see him tearing around the garden, then trying to eat it all. Throughout his issues there have always been good days and bad days, so I wasn't surprised to see him looking terrible again yesterday morning. We missed watching our weekly Dr Who episode together because I was out, but lo and behold, when I started watching it on iPlayer in the lounge on my return he suddenly appeared and was in a cheery carrot-demanding mood! Whisky was so happy entertaining himself in the lounge that I left him with the run of the house when I retired to bed around 2am.

Well anyway, I guess the summary of the week is that he didn't get any better but overall, apart from his weight dropping, he didn't seem too much worse either. On top of this, today his weight was actually up on what it was two days ago, the first increase in about a month. Not by much and he is still very underweight, but it does at least give us a glimmer of hope.

Whisky is booked for a scan this week, so we will just have to wait and see if that tells us anything more. 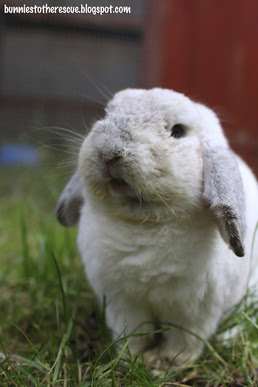 "Oh dear - I've used up all my energy playing and now I don't have any left to mock you. You'll just have to belittle yourself. But when you're done..." 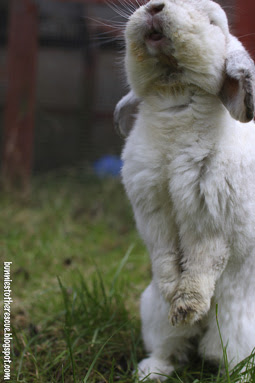 "...don't forget you still need to stick the sympathy carrot treats in this mouf!"
Posted by Bunny-Hugging Volunteer at 21:01