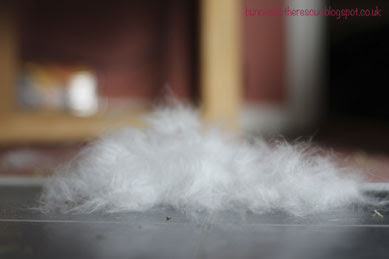 Is it just my little family or do all bunnies in coat-changing season shed enough floof every couple of days to cover a whole other bunny?

None of mine are very keen on the whole brushing/grooming process, though some tolerate it more than others. Afterwards, Whisky will usually retreat to the other side of the room and just glare. I am sure he considers it as though I have mugged him for his precious fur.

At the Rescue we are keen on recycling, which sounds like a complete deviation but bear with me. Since it is outside, quite often you will groom one of the fluffiest of fluffsters, leaving a large cushiony discarded mound of floof behind, you take the de-floofed one back to their little house and when you return a few minutes later some crazy birds will be making off with it to pad their nests with. It kind of makes me want to leave my windows open at home on the off chance a passing robin will save me the job of having to brush bits of Whisky out of the carpet. 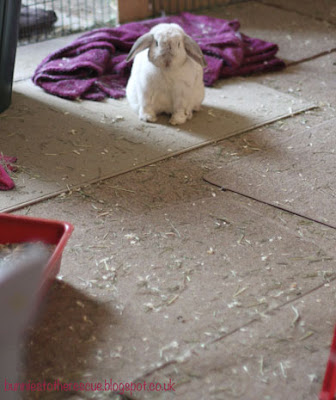 "Measure the steps. Come no closer until that comb
is on the floor and some treats are in your hand."
Posted by Bunny-Hugging Volunteer at 21:41