After 18 months of owning my current camera, I thought it was about time I tried to figure out how to use it. So this week in the garden I've been playing around with adjusting, amount other things, the shutter speed. By putting the camera down on a stable surface and setting a slow shutter speed, it is possible to achieve a sense of motion as moving objects become blurred while stationary ones are in focus.

At some point I might one day become good enough to consider my photographs 'art' and give them fancy titles. For example, this one might be called "Jemima is a fat bunny because..." 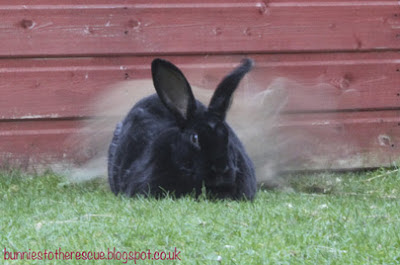 Posted by Bunny-Hugging Volunteer at 19:30