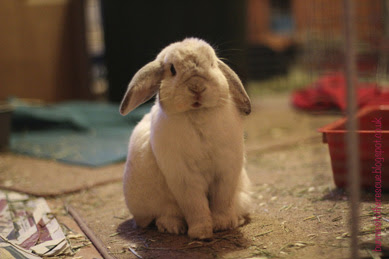 "Oh, by the way - this whole house is now mine. End of discussion."

We had a routine in my house. I would go downstairs to make breakfast and when I returned Whisky would be waiting for me. He would then race round and round my feet from the top of the stairs until the food was on the floor of his room. But no more. On Monday I was half way through washing, peeling and finely chopping his breakfast fare when I turned around to see him watching me with great interest from the hallway.

Yes, this week, after a mere 15 months living in my house, Whisky has finally realised that he really can climb down the stairs.

I was really proud of him, right up to the point where the implications of a having fully free-roaming bunny in the house hit me. I cant say exactly when that was, but it was probably not too long after I looked up from my breakfast to see Whisky stood upright on his back legs in the middle of the lounge. It turns out to be surprising difficult to eat a bowl of cereal with a bunny staring at you the whole time.

Posted by Bunny-Hugging Volunteer at 20:54