Benson and Patty are two of the moodiest, most stroppy bunnies I have ever come across.

When it comes to breakfast, talk about snatchy and ungrateful, however quick you move these two will have the food out your hand (and a few fingers along with it if you are not careful) before you can give it to them. When they've been in sheds with open outdoor grass areas, when you try to let them out they'll barge past you with a headbutt and a glare that suggests the speed of your door-opening leaves a lot to be desired.

Patty has been single for some time. Besides her behavioural quirks, although she's pretty healthy she has funny leg issues which means she needs monitoring and is probably not suited to be rehomed to just anyone. But even amongst our many other special needs residents, she has not been keen on any potential new partner.

Benson, with his strong personality and hilarious antics, has won the hearts of a number of volunteers, but again he is not the sort of rabbit you would re-home to just anyone. You get the feeling that his quirkiness could easily turn into actual fear-aggression if he found himself in an environment he wasn't entirely comfortable with. So rather than leave him single for a while as an available partner for an owners rabbit, Caroline decided it best to find him a new partner straight away.

Which is all good. However, when I found out she was putting these two characters together, I figured there could only be two possible outcomes: 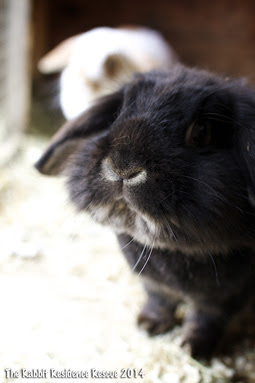 "Oh yeah, we're getting on now. Is that surprise or fear I see in your eyes?" 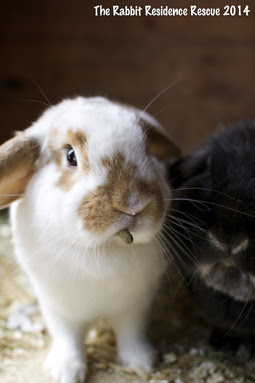 "FYI? Domination plans: these snacks, this Rescue, world. Any questions?"

I'm sorry people. We are all doomed.