I recently ran out of disk space on my laptop, having filled it full of bunnies, so a significant amount of time over the last week has involved having a clearout and re-organisation of my old photo's. Feeling all nostalgic, yesterday when I was looking for something to post to make up for missing the morning, I went looking for my first ever photograph of Whisky.

Sure, I've shown you how he was the first bunny I took a picture of after I bought myself a proper camera, but that was in May 2008 and I was sure I had an earlier one I'd taken either on my phone or the mini camera I had before. As you might remember, Whisky and I first arrived at the Rescue around the same time several months before that. Well anyway, here is the earliest pic of mine that I can find of him: 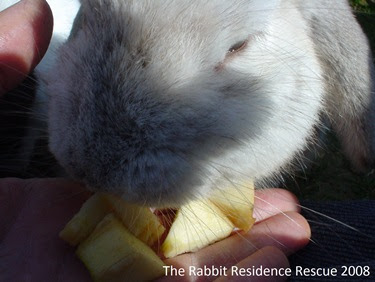 Not a very good picture I'm afraid, and it shows me giving him fruit which, I have since learned, makes his bottom explode, but there you go. Just as I was going to post it yesterday I spotted it was taken at 08:17 on 26th April, which means today is the anniversary of me taking it! (And is why you didn't get it yesterday!)

My special little baby, I have been photographing you for exactly 6 years today. Happy photo-anniversary Whisky Bunny! 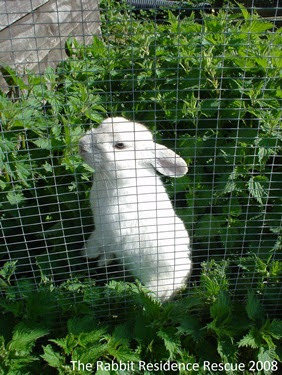 Posted by Bunny-Hugging Volunteer at 08:17