As well as BHV's garden, the Rescue is also home to a few feathery companions. There are at least three robins on site at present (all called "Bob" in accordance with family tradition- or, occasionally, "Mrs Bob") who have decided 'tis the season to be a moderate nuisance. Last year they took some pleasure in following the veg barrow around in the mornings, even going so far as to attempt to steal those strange little grey worms out of the food bucket. This year it seems I'm under great scrutiny for a lot of the time as various brown-and-red blobs hop around, get under my feet, check out the bedding and generally ensure that I'm earning my wages. 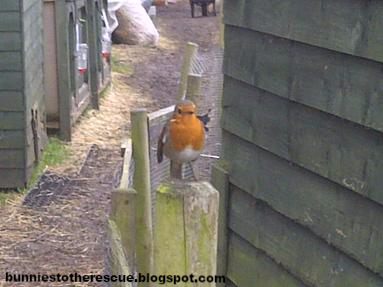 Supervisor Bob coming to see if I'm pulling my weight.