As some of you might have heard at the time, Caroline and I went off to the London Pet Show on 12th May. We didn’t have a stand at the show but we made ourselves visible by wearing T-shirts with the Rescue logo. We chatted to various people selling various products and a few of the other visitors. We saw guinea pig story time, dancing dogs, and ducks being herded by a sheep dog. But what were we most intrigued to see? Bunny show jumping!

I took a lot of photos, but there isn’t one of them with a mid air bunny in focus. So here’s a few blurry ones of this cutie bun navigating one of the jumps. 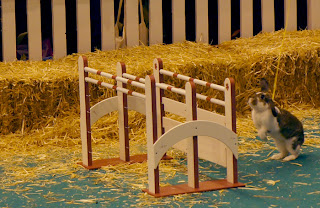 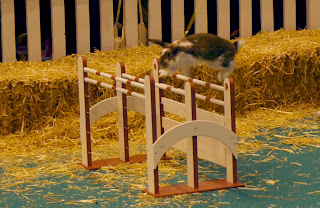 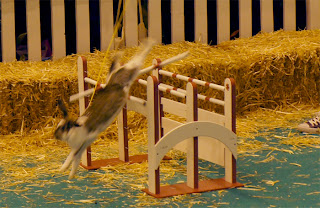 "boing"
Apparently bunny show jumping has been a big thing Scandinavia since the 70s and most of the bunnies had been flown over for the event. This worried us a bit in terms of the stress involved though it sounded like the bunnies only travel abroad once or twice a year and there are vet checks before and after the flight. The other slightly uncomfortable thing for us as a rescue is that these bunnies are bred to be ‘jumpers’, they are not neutered/spayed (so probably live alone rather than with a bunny friend), and what happens to any bunnies that are born but turn out not to be any good at jumping? On the other hand, the bunnies that we saw were in good condition, and mostly seemed to enjoy running around the arena and springing over the fences (apart from a very beautiful Belgium Hare who decided that he did not want to participate at the session we watched). Perhaps show jumping is simply a more organised version of binkying for very springy bunnies? Though I think my two will always prefer ‘free style’.