We have another crazy bunny at the Rescue, a big cuddly French lop called Archimedes. A bundle of contradictions, when he's not growling and lunging at people for trying to stroke him uninvited, he seems to like flopping out at volunteers feet and almost demanding attention.

Mostly, he's hilarious, though it did add an extra level of difficulty to health checks. While I was trying to clip nails of wriggly bunnies, I also had to watch I didn't step on the huge grumpy pile of fluff under the grooming table. 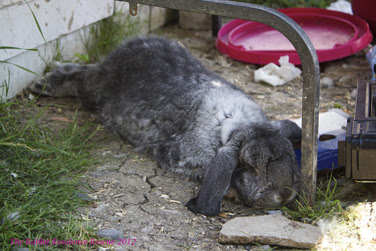 "Hey, bring those feet back! I was using them as a pillow..."
Posted by Bunny-Hugging Volunteer at 23:31