Back on the Banana

Whisky had his first vet appointment for about ten weeks on Friday. Not sure if this is a record or not, but this is possibly the longest he's gone without antibiotics for a long time. He has been very sneezy recently, more so than usual, and the sneezing has been noticeably wetter. He has also had some gunky eye issues, so I thought I'd take him in for a flush and a check-up.

Thankfully no surprises, the flush cleared a lot of gunk out but with the tear duct being blocked it all comes back out the eye. And, of course, he's back on the antibiotics. He mostly gets Septrin which, despite smelling (and presumably tasting) of banana, he's not overly keen on.

The one thing we did learn this week is that I probably need to re-arrange his room until the course is over - the current configuration significantly favours bunny navigation over human navigation leading to a twice daily episode of something resembling Tom and Jerry. 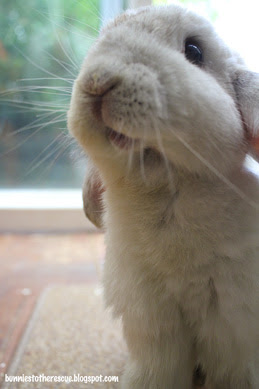 "Oh, so you've regained consciousness now? Next time try ducking under the book shelf."
Posted by Bunny-Hugging Volunteer at 21:33