Well I am afraid I don't have much of a round-up for you this month as I spent two weeks on holiday and have been a little out of the loop on much of the goings on. Well, I say holiday - recently I've been blowing all my spare cash on dentist bills and stuff for the foster bunnies so I couldn't really afford to go anywhere. But I had a packed schedule of projects at home to take my mind off work and a change is as good as a rest apparently. Anyway...

The good news is that we had a great month for re-homings and bunnies being reserved. As well as our usual stream of singles coming in to find new friends we have actually had a good few pairs and groups finding their dream homes.

August is one of our busiest months for bunnies coming back to stay for their holidays, so it was great to see many of my former house guests again, including Tombo and Nausicaä!

Holiday boarding brings in extra donations, which is always crucial for keeping the Rescue running but more so this month as unfortunately we had several expensive veterinary bills too.

The really sad news was that it was finally time to say goodbye to Austin, one of the very special bunnies seen in our logo, who had a lump growing inside him for the last few years. The lump was found on his vet check as he was about to go to a new home and after surgery revealed it could not be removed without killing him he became a permanent resident. Although we are all terribly sad at his passing, we are at least comforted that he had many more months of happy living than the vets predicted and only really started to show signs of struggling towards the end as the growth seemed to accelerate. Austin's last few months were spent living a life of luxury in Caroline's house with his devoted partner Starburst. 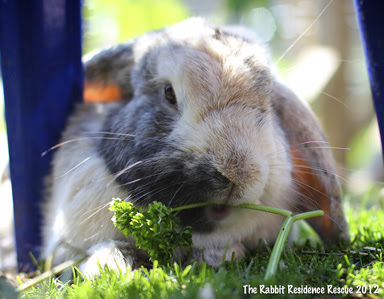 Posted by Bunny-Hugging Volunteer at 23:15