June was a very busy month at the Rescue, with usual re-homings, bunnies being given up, site maintenance and events. But it was also a very sad month.

In the first week of June we had to say goodbye to dear Joseph.

Then Lara, who had been having problems for a few months that our vets could not resolve, went downhill over a few weeks and passed away from what a post-mortem revealed to be liver problems. This hit me quite hard. Lara was a really sweet and shy little Dalmatian Rex who had been at the Rescue from when I first started volunteering. When her previous partner died in 2011 we tried her with Whisky and she spent about 6 weeks living in my house. For reasons I never really understood, they absolutely hated each other and when put in the same space would charge aggressively at each other and fight. I was really sad to have to give up on bonding them, but it clearly wasn't going to work. After getting to know and appreciate her so well over that time, when she was back at the Rescue I would always take extra time to interact with her during the breakfast rounds. Though she wasn't really a big fan of human attention, she certainly appreciated getting her pick of the morning vegetables! It is awfully sad not having those moments with Lara anymore. I do miss her. 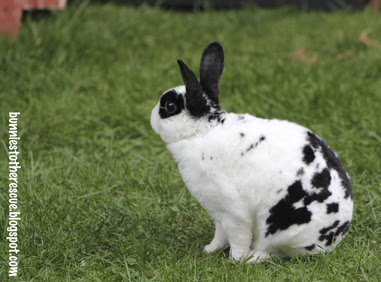 Lara surveying my garden in 2011

The following weekend I was delivered more bad news when Vicki arrived at the Rescue to board her bunnies. It transpired that the very same day we lost Lara, our dearest little Cora also passed away. A black and white Dutch with cute little stubby ears and distinctive markings, I can't really explain why I had become so attached to her. Perhaps it was her slightly unusual looks and terribly sweet nature, and perhaps on some level she also reminded me of my own little Megan. Cora and her partner Clarence had only fairly recently been adopted by Vicki, one of our key Trustees and fellow author on this blog. They had been staying with her on and off or the last year as Vicki had been fostering some of the special needs buns of which Clarence is one. I had been looking forward to seeing Cora while she had her holiday at the Rescue and was absolutely devastated to hear of her sudden passing. Binky free little one. 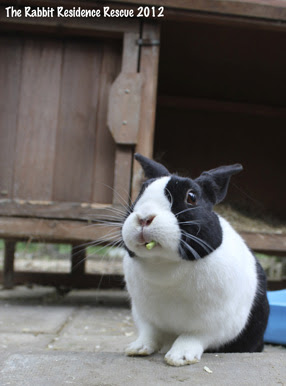 Then last week we suddenly lost Goldilocks from what appeared to be some sort of digestive impaction. Goldilocks had come to the Rescue via volunteer Hannah and quickly after arrival was bonded with special needs bunny Flin. A perfectly happy and healthy bunny her whole time at the Rescue it was a shock to suddenly lose her so quickly. 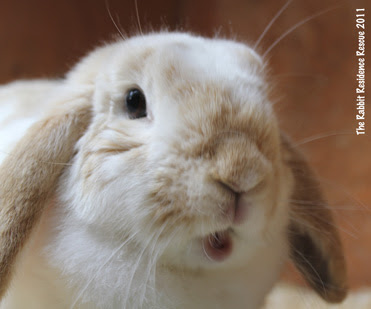 But life goes on and all those other bunnies at the Rescue still need us to keep going regardless. All we can do is look forward to what we hope will be a brighter, warmer, happier July.

Thank you for reading this post and giving thought to all the dear souls we have seen leave for the bridge this month.

Posted by Bunny-Hugging Volunteer at 18:41