The Smell of Saturday

Yesterday was the first Saturday in a very long time I didn't need to throw myself out of bed early in the morning to go feed and water 200+ eagerly awaiting bunnies. I only needed to feed three. But instead of being met with the usual happy furry faces when I finally rolled out of bed, instead of Whisky following me downstairs to direct my chopping and grating from the kitchen doorway, they all scarpered. Whisky hid in his kennel, Anouska and Bobbit in their bolt box. It was a very disconcerting way to start my day at home.

The lagomorphic distrust, which continued throughout yesterday, was no mystery. It was sustained in part by the change in routine - they are not used to me getting up so late, or to me being at home all day filling the house with the sort of bleachy smells you might associate with a clean bathroom. Bunnies have a natural, quite sensible fear of the unknown and the unfamiliar. My bathroom is rarely so clean. But that wasn't what started it.

This morning as I went to greet them and collect the bowls they all came running like nothing had happened. Why? Because this morning, having had several days of not needing to leave the house, I had showered. For an animal whose idea of a wash is to lick their self all over with the same tongue they used to lick their bottom just minutes earlier, they expect a surprisingly high level of cleanliness in others. 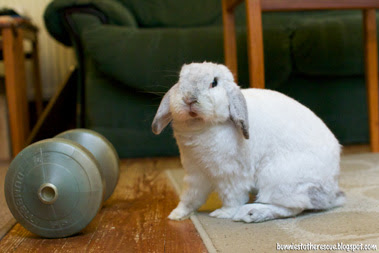 "Hey, we generally remember humans by their smell, don't blame us for not recognising you! Plus, you're looking a bit fatter than I remember my human being...perhaps it's time to hit the weights again?"

Does everyone else get this kind of stick from their bunnies or did I just strike 'lucky' in Whisky?

Posted by Bunny-Hugging Volunteer at 14:35