All Message, No Bottle 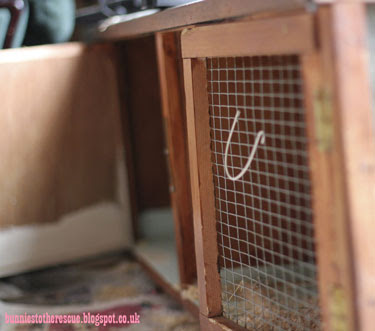 Jemima and Whisky have been leaving each other little messages in the lounge, a room that both have now access to at different times of the day. A bit of furniture chewed here, a poo there. It's a territory marking thing.

It started off quite subtle, contained to the area in and around the small hutch that houses Jemima and Elvis' indoor litter tray, but over the last few days the poo started to spread further out. Then last night Jemima decided to make a play for the rug. She claimed it. Completely. And it wasn't until I knelt down to sweep up the many MANY little messages she left for Whisky, I discovered it wasn't limited to poo.

In Jemima's defence, it also transpired that Whisky had been sneaking into the bedroom of the hutch to leave his own big wet messages. So having scrubbed the rug and hutch last night, the task for today was to repaint bits of the inside so that any future messages won't be quite so quick to seep into the wood. It didn't take too long but until the paint dries Whisky is shut out of the room, so NOW he's being moody about having his access to parts of the house cut off. 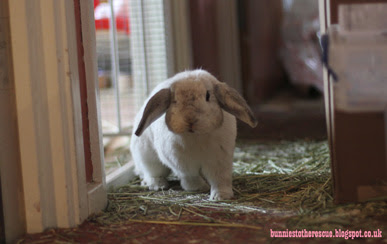 Sorry Whisky. I would let you in the lounge, but I don't think a magnolia nose would suit you.

Posted by Bunny-Hugging Volunteer at 18:07