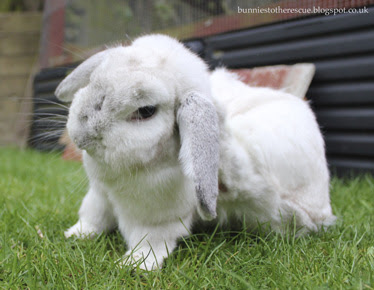 Bunnies have two types of poo. The hard round poo you see and the big blobs of smaller round soft poo (looks like a bunch of grapes) that they eat to send food through their digestive system a second time. In your average healthy bunny with a good diet you would rarely see the soft poo - they generally eat it as it comes out.

But Whisky is not your average bunny, nor is he often entirely healthy thanks to his various issues. This is a bunny whose soft poo I get to see daily. I don't know if it has something to do with the impractical shape of his damaged jaw, but instead of eating his poo on the way out he lines it up on the floor first, sometimes as a snack for later. At best this leads to some mild staining of the carpet, at worst some serious scrubbing of carpet and bunny.

Fortunately he tends to stick to one spot next to the blanket he sleeps on (or near) so cleaning up after him is usually fairly straight forward. But the downside of his poo-position strategy is that he sometimes rolls in it during his afternoon nap or stands in it when he wakes up. Mostly he will clean it off himself later on if he does this, but sometimes around his tail and feet it can get caught up in the fur and he struggles to remove it. So cleaning it becomes my job, and one that he doesn't enjoy. Even when there's nothing to clean it still means picking him up to check, which like any bunny he's not keen on. Recently he has been starting to get really fed up with being lifted into the air every day, so we have come to a compromise. Now, on alternate days, I don't pick him up to check, I lean over him and sniff around his rear-end for that distinctive caecotrophic odour.

So far this week it has been working well, but I can't help feeling that he's making me the butt of some kind of joke...

Posted by Bunny-Hugging Volunteer at 06:52