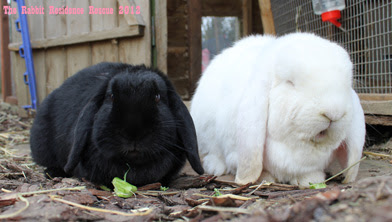 Hettie and Errol went to a new home last week, to live as house rabbits. We were particularly pleased to see these two rehomed. Hettie came in with deformed bits, which required corrective surgery to stop her from urinating on herself. Errol was from one of the largest cases we have had to deal with and was likely father to many of the other bunnies from that case. Could look a bit grumpy at times, especially when dragging those enormous ears around in the wet, but also a constant favourite with visitors to spend time with as he is so big and soppy.

Their new family also includes a dog, so they needed a pair of rabbits that wouldn't scare easily in a new environment. Whereas some rabbits would be terrified being introduced to a larger animal, these two seemed to take it in their stride. Errol soon put the dog in it's place by battering it on the nose when it stuck it where it wasn't wanted.

Posted by Bunny-Hugging Volunteer at 07:38