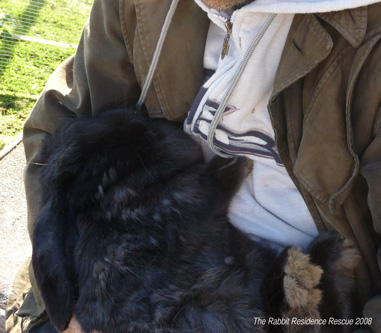 Mopsy at the Rescue Nov 2008, letting me cradle her for tummy grooming!

I hope you don't mind me sharing that little story of what I like to think happened to my special little boy Santa after he left me. Not the usual happy tale I post here, but as I have mentioned before, Santa really was the original inspiration for this blog. Caroline was fed up of me taking up all her time telling of all the crazy things he used to get up to and suggested I start a blog about it to share the stories of him with other people (instead of bothering her!).

There are a number of bunnies I could have picked to meet him in the story, but Mopsy just seemed like she was the right one. You have seen her sister Flopsy on the blog before. Flopsy and Mopsy were friendly French lops who lived together at the Rescue. They were like big soppy mascots and generally wandered about the place all day doing their own thing. Always happy to get stuck into something to help out, at one point they even fostered a litter of babies who came in to us.

After Mospy died, Flopsy had a few partners and for a while even lived in Caroline's office/hospital, hanging out with the poorly buns and keeping Caroline company while she worked. Her last partner was a stray that had been handed in to us, a handsome stud (Caroline's description, not mine!) Caroline named Elvis.

Caroline was deeply attached to Flopsy, as were all of us. When, just a few weeks after I lost Santa, Flopsy's time came to go to Rainbow Bridge, it seemed fitting to bring together the two bunnies they left behind - Jemima and Elvis were bonded and still live together with me now.

So that's that, if you followed my reasoning - it somehow seemed right that the dear motherly soul that should meet Santa was one who looked over all the bunnies at the Rescue and whose sister was shortly to join them at the bridge leaving her partner to take care of Jemima.

So that's the sad stories done. I promise my cute little house guests will return to cheer us all up soon!

Posted by Bunny-Hugging Volunteer at 11:00