Monday - Running out of good veg for bunny breakfast. Trying to write code to process email address changes, but inspiration lacking making whole thing very mind-numbing. Found lump on Tombo's face, probably scabby wound from unknown fight but not noticed it before, not too worried. Board meeting for directors/trustees of the charitable company of the Rescue. Late shop, no broccoli so sprouts instead.

Tuesday - Last of the broccoli for bunny breakfast. Attempting to construct database view for incoming mail bounces, brain dragging trying to negotiate curious data types appearing in fields so try to jump-start it with energy drink. Fail. Give up. Whisky had disgusting dirty scent-glands, had to pull out crusty bits with fingers, very yucky. Washed Tombo's face, hard lump appeared to be under skin, booked vet appointment to check it out. Jemima suspicious of something, not sure what but suspect something to do with me smelling of Whisky scent glands, bolted off at dinner time then avoids me, so NO bunnies talking to me today.

Wednesday - Sprout with bunny-breakfast, but only small amount and one veg of three so hopefully not a big change. Trying to figure out how to rsync over ssh without a login shell - it's almost like everyone I work with is trying to play tennis with my head. Whisky underside covered in poo like he's laid in it - suspect sprout-related bottom explosion. Try to remove with fingers, still soft, big mess. Trim out with scissors. Take Tombo to vets, hardly any traffic, arrive early but emergency in before us so appointment late. Vet confirmed probably just fighting injury, should heal. Back home, feeding and cleaning. Trying to explain to babies that it really doesn't help when they climb into the dustpan. None listen. Ask Whisky to write tomorrow's blog post for me but he declines in favour of licking himself. Inspiration fails me, decide to ramble on about my tiring week so far and end with a picture of Tombo so everyone's happy. 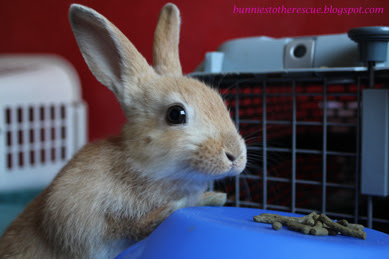 "Snacks? For me?"
Posted by Bunny-Hugging Volunteer at 06:30