Well according to Blogger this is our 200th post, so I thought I'd better give you something a bit different. With that in mind, today I am going to share with you some very special memories of mine from September 2010!!! (OK, that seems a bit random, but bear with me.)

You see, Whisky was not the first big-eared fluffster to live in the room that is now his. The first occupants, of the lagomorph variety anyway, were a set of fosters made up mostly of teeny balls of fluff.

When Mindy gave birth to a second litter at the Rescue just a few weeks after she arrived, Caroline asked me to take care of her first litter until they were ready to be rehomed. The Rescue was already beyond full, Mindy being part of a very large emergency intake of bunnies that summer, and she needed the space.

So into the second bedroom in my house they went:- Google, Shandy, Mohito, Bing and Badger. 5 girls, 5 weeks old, all adorable. They spent the first week or so adjusting to their new environment together in a single cage (they were pretty small at the time), but when they were big and brave enough I started letting them out to play. That's pretty much the day the peace in my house ended and the chaos began... 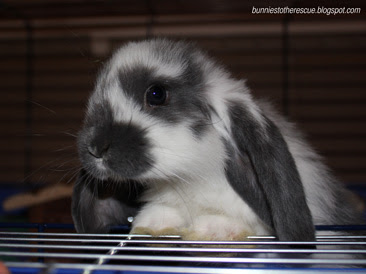 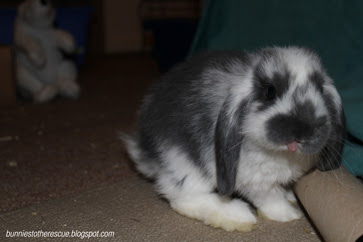 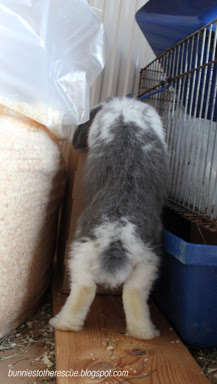 "We're allowed in here too, right?" 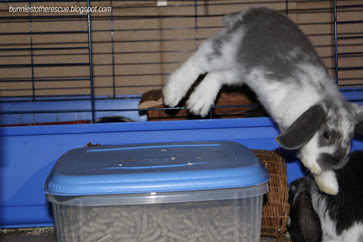 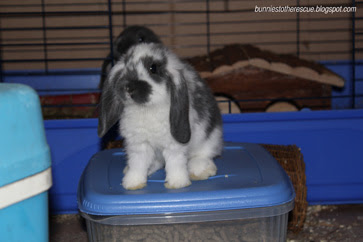 "I claim this tub of snacks for all bunny kind. Well, for me anyway." 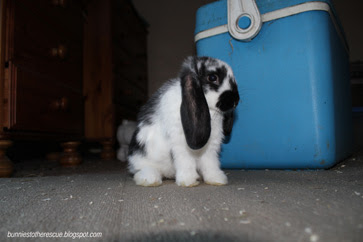 "There's snacks in here too, right? Yeah, they're mine now." 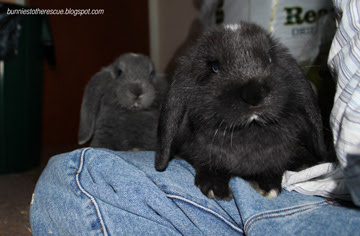 "And we claim this human to do all our bidding from this day forth."

If you are not squeeing with delight by now (I know I was constantly those first few weeks), you're probably on the wrong blog! So anyway, very, very cute, but it gets more special. You see, even before Google, Shandy, Mohito, Bing and Badger arrived, I had an even more precious guest already living with me. Here she is - Twiggy the Hare. 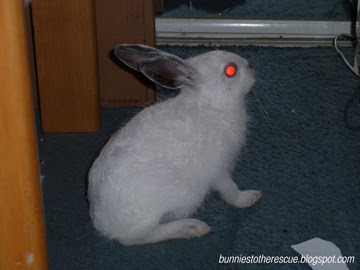 Yes that's right, hare. She was handed in to the Rescue as a stray baby bunny and passed to me to look after, but it soon became clear that something was different. Her behaviour, her reaction to other rabbits, the tremendous growth rate (especially the way her legs seemed to grow faster than the rest of her!).

A little research and some communication with the Hare Preservation Trust(HPT) led us to conclude she was indeed not a rabbit but a rare albino hare. Being wild she was naturally very scared of her captivity and any time I was nearby she would either hide away in her little house... 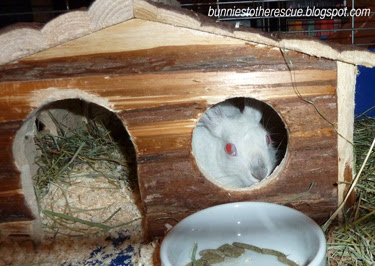 ...or go and sit behind the furniture until I left the room. When left alone she would literally run up the walls trying to find a way out, which was very distressing for both of us. My research had indicated that it is not uncommon for young hares in captivity to become unwell from the stress and even die, so we decided the best thing for her was to find a way to release her back into the wild. HPT directed us to Tiggywinkles wildlife hospital who have a programme of releasing wild animals into natural controlled environments.

They were a bit reluctant to take Twiggy in at first. When Caroline and I arrived with her the conversation went something like this:

RECEPTIONIST:That's a domestic rabbit. We don't take domestic rabbits.US:We are a rabbit rescue. We know rabbits. This is not one.
RECEPTIONIST:I'll get the vet nurse.
VET NURSE:That's a domestic rabbit. We don't take domestic rabbits.
US: We're pretty sure it's a hare.
VET NURSE:I'll get the vet.
VET:That's a rabbit. She's too small to be a hare.
US: She's a baby. Last week she was even smaller. Next week she'll be much bigger. Besides, HPT told us she is definitely a hare. If anyone knows what a hare looks like...
VET: I'll get the boss.
BOSS: OK we'll take her I guess.
VET: [picks up Twiggy - her huge long legs drop out from underneath her] Er, yeah, OK I see your point. I'll take her out the back and put her in a shed.

So, as far as it could, the story had a happy ending with Twiggy being released after a short stay at Tiggywinkles as well. And of course some months later, my other guests all returned to the Rescue to find themselves husbuns and new homes.

Well that's the story of the little furry friends that got to use Whisky's room before him! I hope you enjoyed reading about it and I look forward to sharing the next 200 tales with you on this blog! 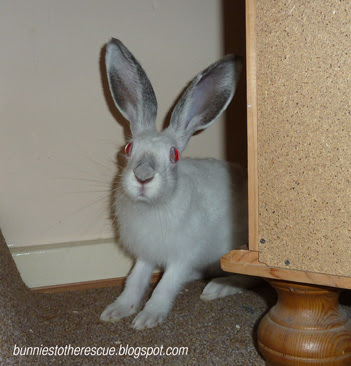