So here is where we are so far.

Neroli had a dental a couple of months back. Although her teeth didn't look too bad at the time, she had blood and ulcers in her mouth, seemingly from the small spurs she did have. The dental made a huge difference, suddenly she was back to regular old Neroli and the sores went away. However, the day she arrived with me she had tiny poo and her eating was less than enthusiastic. A trip to the vet turned up no problems, nothing obvious in her mouth, but her eating over the weeks has been erratic - sometimes enthusiastic, sometimes little interest in food, rarely ate any hay. Always seemed lively though, despite extreme shyness, and certainly when Whisky was anywhere near. The vet suggested if her weight started to drop she should go for a dental anyway and see where we go from there. Her weight had been up and down in small amounts along with the enthusiasm for food and the poo size, she had a few great days at the beginning of the week, but then over Tuesday/Wednesday her appetite almost disappeared. So late last night (Wednesday) she went back to Caroline for overnight care before a vet appointment today, where they kept her in for a dental. I am currently waiting to hear the outcome from Caroline.

Poor Whisky meanwhile started to sound unpleasantly snuffly over the weekend. I had been hoping to keep him off antibiotics for as long as possible, I suspect this long 3+ month stretch he has had without meds is one of the reasons his digestion has been so normal (he now eats a fair amount of Timothy Hay!), but this latest bout was louder, wetter and sneezier than usual so back to the vets we went. This was interesting, we got to see the new exoctic-specialist (his old magic vet moved away over the summer), and the good news was the sounds seem to all be nasal not in the lungs, but he is back on antibiotics and eye-drops again. He also had his eye flushed as much as possible, which he didn't like too much. When the vet put him back on the table he said to Whisky "There you go, all done, you can go have a cuddle with mummy" (he did apologise for that after - I guess he's not so used to guys bringing bunnies in) at which point Whisky instantly leapt off the table onto my shoulder. This is a not-uncommon bunny thing to do, as they desperately seek the security of the one person in the room they know, and is not to be confused with affection, of which you will get none of all the way home and for the rest of the day. So now we are back to the daily Whisky "he-hides-I-seek-and-medicate" routine.

Then there is Google. Unfortunately, after we raised the extra money for his treatment, he has been too ill to start it. Caroline is currently battling his breathing problems hoping to get him to a point where he is healthy enough to be operated upon.

There are a few other less serious and some ongoing issues with various bunny residents in our care, but the most saddening is probably poor Rocket. Amy went to give him breakfast yesterday and found one of his eyes bulging out and him generally in poor condition. He's such an in-your-face little guy we all interact with him frequently, I am certain we would have noticed any warning signs, so this seems to have come on very quickly. It is very similar to what happened to one of Rocket's relations, Neroli's former partner Cecil, who because it was felt became too weak to survive abscess (and eye) removal surgery we had to say goodbye to. We are absolutely devastated and have sought the advice of several vets about what is the best next step.

Well hopefully that gives you an idea of what we have been through this last week. I thought I would put this up now in case we hear more news before the morning and I don't get time to update this post.

I will leave you with a photo of our dear Rocket from earlier this year, looking (as usual) like he's ready to bite your knees off (he usually is). If I'm not mistaken, in this picture he's even trying to turn his ears into pointy weapons! Such a special soul. We love you Rocket. 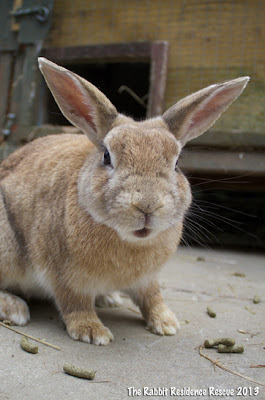 "I don't have weapons. I AM a weapon."
Posted by Bunny-Hugging Volunteer at 19:43