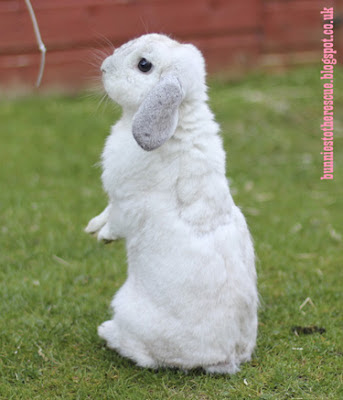 I think I am in danger of helping to perpetuate the bizarre notion some people have that a bunny is a kind of animated cuddly toy. Blame Whisky, cos he kind of looks like one most of the time, so very very cute and adorable. Most of the time. When I post pictures to Facebook I can almost hear the delighted child-like squees of many of my non-bunny-parent friends, as they fight back urges to head straight to the pet store to get one of their own.

This is not exactly a good thing. So many of the bunnies at the Rescue are here because someone thought they were buying a cheap low-maintenance novelty, often for their children, only to discover they have gotten themselves a complicated and expensive little animal that requires quite a bit of hard work. Every day, for the rest of its 12 year life. The feeding, the hours of cleaning, the vet visits. Eventually deciding it is not what they signed up for, these people wash their hands of this inconvenience they have created in their lives by dumping it (and their adorable rabbit) on us.

Of course, dear readers, most of you have your own little fluffy bank-account-emptying, stress-inducing free-time-hoggers of your own, so you are well aware of the responsibilities that come with parenting bunnies. For the rest of the world, I present here to you the side of Whisky's life, over the last year and a bit, that isn't in the cute pictures.

NOTE: There are pictures - they're just not very cute (you'll have to click the links in the text to see them - I've hidden them away so as not to disturb the casual visitor).

So that's a peek behind the curtain of being a bunny parent. Cute, huh?!

Posted by Bunny-Hugging Volunteer at 07:34