Nearly a year after our beloved Smokey died, we were ready to welcome new fluffy additions to the family. Trouble is, how do you do that? With Smokey (and his wonderful brother, Thumper) we didn't know anything about the Rabbit Residence Rescue or indeed anything at all about bunnies. So our choice was easy .... er .... 2 rabbits, not too big, not too small, and that's about it. And then we failed with the not too big. They started small and cute - and then they grew. And grew. And grew. And grew. Thumper was a whopping 3 foot long, 1 stone rabbit! Boy did he eat. I swear they were dogs with big ears and as cheeky as they come! And how we adored them for it. In any case, they chose us, as Thumper ran up to us to say hello, probably would have eaten my shoes if I'd let him, but you get the idea.

So we were not going to make mistakes again. We knew what we were doing. We were in control.

Well I'd worked with Caroline for a couple of years and knew there were lots of bunnies. But when you have to choose 2 - well, how do you do this from so many appealing little faces.

Caroline suggested that we picked 3 pairs and then she would bring them round to our house for a final choice.

Having been house checked and passed by Caroline, which was traumatic, we visited the rescue several times to try and narrow the selection down. We held out carrots and dried food. We crawled in the mud and tried to speak 'bunny'. We stroked and tickled many ears and cheeks. Eventually we picked out 2 pairs. Caroline suggested we considered a third pair but no, 2 was enough, we knew what we were doing.

So on the big day, Caroline came round with the 2 pairs. But she'd also brought a surprise wild card pair as well as she thought they would get on with us. Well clearly we didn't want them - not our choice after all!

So the 3 pairs were brought in and our intended new bunny area was fenced into 3 areas. We had no idea what would happen next.

Well for those that have never gone through this, it's interesting. Each bunny pair is let loose in its area - it's then a waiting game to see which bunnies will fit in best in both the area and with us. This is done in bunnies own time. There is no hurry. All in all it took about 3 hours.

For the new parents, this is quite stressful. For Caroline, this is another re-homing and while this was going on, she did all the paperwork.

Without going into too much detail, the "wild card" pair were soon at home. The two pairs we had chosen seemed reluctant to step out. Whereas a little brown head soon popped out for a nosey around, then swiftly followed by the rest of Shiloh. He was soon mooching around, munching away and while his sister, Luna, was slower, encouraged by her brother eventually she came out to have a look around. The other pairs were still less comfortable. Wanting to give everyone a chance we moved the pairs into different areas and then started again. The same happened, except that this time Shiloh came racing out, followed shortly after by Luna. The other pairs were encouraged with some food but were still less happy. Even favourite treats didn't work. We even managed to stroke Shiloh, who seemed like the most affectionate and friendly little chap (which he most certainly is). The decision therefore became quite easy - once again the bunnies had chosen us. And the rest is history.

Shiloh and Luna are now very much part of the family and treat the house as their own, evidenced by their desire to chew everything in the house, shoes, carpets, sofas, wallpaper, work-papers - but that's another story for another day. They are a cheeky pair, never ones to miss a chance for a treat or a cuddle and while Luna is still quite shy, she's coming out of her shell quite nicely and is as bold as they come when it comes to food.

This also shows how much Caroline knows about the rescue bunnies and which bunnies will match with which parents. She's always worth listening to. 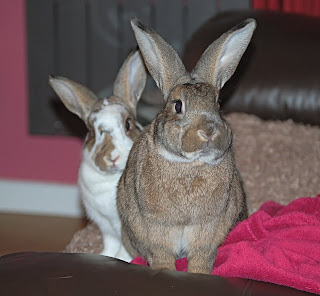 "Hide behind me Luna, I think Daddy's found out what you did to his shoes!"
Posted by bunnyhelper at 06:30