Today I thought I’d talk to you about Chompy, a very handsome but cautious bunny who stayed with us over the winter with his friend Luci Lu. Because Luci Lu was underweight and had dental issues they had a higher calorie diet than would usually be recommended. Chompy was a little overweight when he arrived, and gained more weight as I battled to get Luci Lu’s weight to increase or at least to maintain it after two dental operations, and then later a developing tumour on her cheek. It can be difficult to balance the needs of a bunny pair in such situations. Luci Lu needed as many calories as possible and ate slowly making it impractical to separate the bunnies just for meal times. And when a bunny pair are attached to each other it would be sad to have to separate them at a time when the poorly one particularly needs their friend. So, sometimes the best strategy seems to be to slightly sacrifice the diet of the well bunny to give the poorly one a better chance.

When they arrived in late December Chompy weighed 2.35kg. But by March he weighed a whopping 2.65kg! 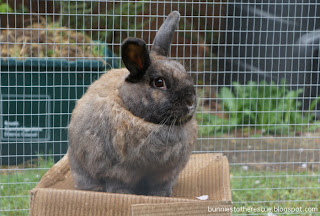 Very sadly little Luci Lu lost more and more weight and Chompy and I eventually had to say a very sad goodbye to her at the vets as the tumour took its toll. :(

Chompy stayed with us for another 6 weeks or so before returning to the rescue to meet a new friend. By then, back on a normal bunny diet he weighed 2.1kg, and he has lost more since then. Here is a photo of him from last Sunday at the rescue. He had moved since my previous visit and when I saw him I did a double take and asked aloud: “Is that you, Chompy?” 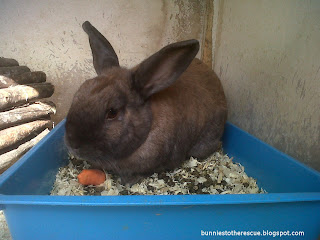 But I cannot finish this post without showing you a photo of Luci Lu: the happy, scruffy little monkey who peed on the carpet, kicked the litter tray contents everywhere, spread syringe feed all over me and touched my heart. Rest in peace little one. 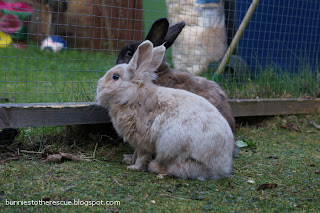 Posted by Under-the-thumb Bunny Mum at 18:50