A Day and a Bounce

Just a quick Whisky update now that he has been home 24 hours.

He was a bit confused and unsure of what to do with himself to begin with, but had almost settled back in to his regular routine again by this evening. He was even starting to forgive me and 'hang out' in the same general vicinity. I was a bit concerned at how few poo's there were in his room considering he had been back a whole day, but he had been eating (hay, dried grass, both meals) and since there were some so I was trying not to worry too much. Then it occurred to me - there were not many poo's in his room. Oh well.

On the plus side, this evening he has even been binkying in his room, which I don't remember seeing him do before (he usually saves that for the garden or hallway), so I am taking that to be a good sign! I wish I could have caught it on camera for you, but fast moving bunny, nighttime and poor indoor light etc. This is the nearest I got! 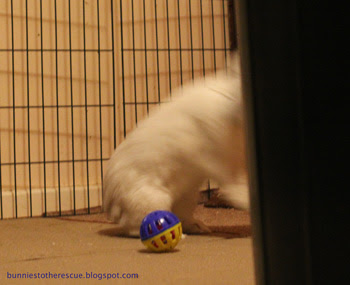 Posted by Bunny-Hugging Volunteer at 22:41