The first was that we were finally able to announce that the Rescue has been granted Registered Charity status. This is a very important step for the Rescue and would never have happened were it not for the tireless efforts of Vicki and Colin. The process has been long and time-consuming, but the results will hopefully bring many benefits for our work with rabbits.

The second good thing was that there was a break in the weather long enough to get Whisky out in the garden. In fact I pretty much only lumped these things together in the same post because I thought you would rather see a picture of Whisky than one of all Vicki's paperwork!!! 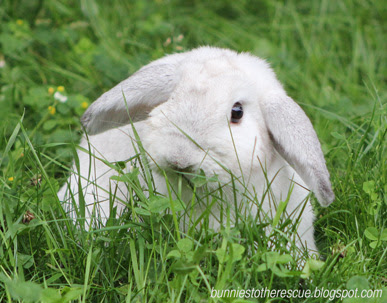 "OMG! This grass has gotten so long that even I can nom it!!!"
Posted by Bunny-Hugging Volunteer at 06:30