The Korean art of Bun-Kwon-Do has its roots in the ancient warring warrens of the Silla region some 2000 years ago, but it's formalisation and adoption as a modern sport probably owe more to the elements it takes from the Japanese art of Bundo and the British fighting form known as Getyopawsoff-Mycarrots. The name Bun-Kwon-Do roughly translates as "The Art of Striking with the Paws" and indeed in the timed continuous-point-scoring rounds of the Olympics, heavy chomping is strictly prohibited.

For years, the winners of this gloriously energetic sport have hailed mostly from the East Asian countries, but this year as the flame of the Olympic torch arrives in London, all eyes are on a buntender much closer to home.

Meet BettyBoo. A self-proclaimed master of the art, here we see our local hero in her daily workout, demonstrating her lightning fast double-pawfist-strike on a large piece of practise parsley. 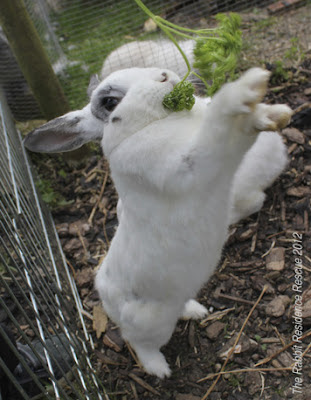 See us proud, BettyBoo. Our thoughts are with you.