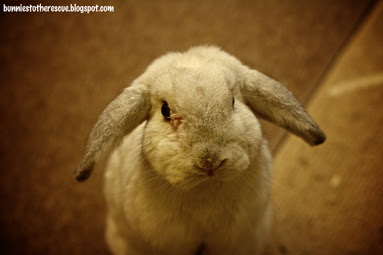 "Shall I tell you what happened to me yesterday? Are you sitting comfortably?"

As he stepped from the back of the building, Whisky spotted the box and knew immediately what it was. A bunny taxi – those things you walk in the front of, a metal door shuts behind you and you find yourself whisked away across great distances (often to places you don’t want to be, like an audience with “The Vet”). The only question was:- where was its passenger?

Moving around to the front of the taxi, Whisky found the door closed and no-bun inside. Empty. Empty, but for the lingering scent of somebun not unfamiliar. That grumpy little fluffball that recently moved in to the next apartment in his building. Something was afoot and Whisky didn’t like it. Had she tailed him here? What was she up to? As he was trying to figure out his next move he spotted a familiar face staring off into the distance just a few feet away. An unsavoury character he referred to merely as “The Human”. A mine of information, here was someone who certainly would have the scoop on his mysterious neighbour. Time to get some answers…

Neroli watched the little grey lop rubbing his chin all over the outside of her taxi then scamper across to where the overweight human sat on the step. She could barely hear their words from her hiding place in the shadows of the wall, but even so she could guess what the subject of their conversation was. The time for watching was over. Time to take action.

Whisky saw a brown ball of floofy fur come floating across the paved ground and stop a few inches in front of him. She didn’t come at him with the same lightning speed that she had that night he’d accidentally wandered into her apartment, but still he felt caught slightly off guard. Was she merely making a dramatic entrance, here to talk? Or did she have a more violent method of communication planned? Not sure how to play it, Whisky stood his ground and waited, tail in the air ready to react.

The next few seconds were a blur. Fur, teeth and someone shouting at the two of them in a panicked voice. Then she was simply gone, as if she had been lifted off the ground and flown away. When Whisky caught his breath, he noticed her taxi was gone too.

Back in his apartment later, Whisky flopped on his blanket with the mornings post. Between the junk mail and overdue bills for bulk carrot orders, there was a parcel from Auntie Jane - a nice scarf for the winter. At least that was one thing to cheer him up. Whisky put it to one side and made a note to ask the human to take a picture of him wearing it later in the week.

What was today's drama about? And what happened to the mysterious and floofy neighbour? Despite a complete lack of clues, Whisky had a feeling the incident might just turn out to be the first chapter in a much longer story...

Posted by Bunny-Hugging Volunteer at 17:36