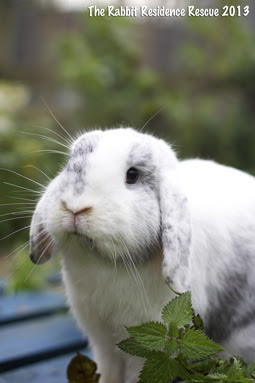 This is Google, a sweet and friendly resident at our Rescue. Although his name is Google, Caroline sometimes calls him "Google-buck" and I sometimes call him "Google-too" - this is because of Mindy's girl Google that came before him (we wouldn't normally re-use a name).

The reason we came to have two Googles is because he wasn't ours. Having re-homed our own Google, this was an owners rabbit who came in to be bonded with one our girls. In fact, just as I was considering taking then-single-bunny Liberty home to meet Whisky, Google swept in and chose her for his very own. The owner's situation at the time was such that they wanted the new couple to stay with us on a little holiday for several months after bonding, but when the time came for Google to return home the owner's situation had changed and they couldn't take him (and his wife) back. By this time we had all become used to calling him Google, so that was that.

This was all some time ago now, and the odd minor health issue aside, Google and Liberty have been living together very happily at the Rescue ever since.

Sadly though, there is more to Google's story. Last week during a routine health check Caroline found a lump in Google's jaw. Our vet has told us this one appears to be a very serious problem and has referred Google to a specialist for a CT scan and probably difficult surgery. The first appointment with the specialist will be next week.

We have had the first bad news already - the scan and treatment are likely to cost between £400 and £1000. Yikes! This is more like what the Rescue would usually spend on a months worth of vet bills, all in one go for one rabbit's treatment. However, we really believe it will be worth it if it gives him a good chance of a long and happy life.

So today I ask you to send prayers, healing vibes and good wishes to our little boy Google. (Donations are also gratefully received of course!) We should have more news by the middle of next week.